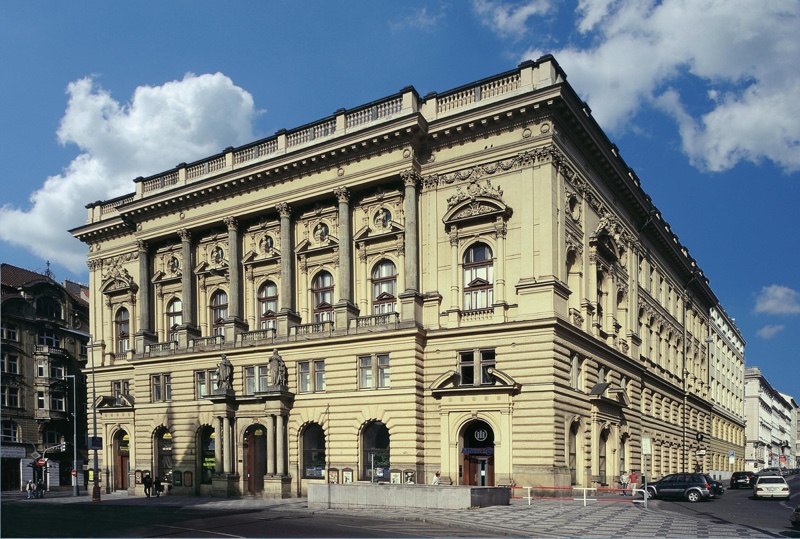 The National House of Vinohrady was designed by architect Antonín Turekwas and built in 1894. It is located Namesti Miru Square, in the centre of Prague.

Prague is the 15th largest city in the European Union and is the historical capital of Bohemia. Bohemia was a kingdom in the Holy Roman Empire and subsequently a province in the Habsburgs’ Austrian Empire. It has been a political, cultural, and economic centre of central Europe with waxing and waning fortunes during its 1,100-year existence.

Prague is home to a number of famous cultural attractions, many of which survived the violence and destruction of 20th-century Europe. Main attractions include the Prague Castle, the Charles Bridge, Old Town Square with the Prague astronomical clock, the Jewish Quarter, Petřín hill and Vyšehrad. Since 1992, the extensive historic centre of Prague has been included in the UNESCO list of World Heritage Sites. Source: wikipedia

Prague is a city rich with cultural and historical attractions; major museums, galleries, theatres and exhibitions.

For more information on Prague: http://www.prague.eu/en

We hope that you will be able to take some time before or after the congress to explore this incredible city.

how to get there

How to get there

The National House of Vinohrady (Narodni Dum Na Vinohradech) is located at Namesti Miru Square in the center of Prague, in the Vinohrady district.

Namesti Miru Square is a 15 minute walk from the famed Wenceslas Square, and is close to the main railway station and the D1 motorway.

AAA Taxi or 1.1.1 Radio Cabs – This is the biggest taxi company in Prague and also has the airport transfer contract as well. AAA has booths in both Prague airport terminals and provides a regular Prague airport transfer service to anywhere in the city. The luggage charge is included in the price. These cars are gradually all being sprayed yellow for easy identification. They have fixed rates from the airport and currently Wenceslas Square is @600kc increasing to 700Kc for most of the centre. Note that you get a discount on the return trip if you go with AAA both ways. It works out to about 200Kc off the normal return fare.

GETTING TO PRAGUE BY BUS

Flixbus – offers bus services to Prague from within the Czech Republic and from other countries bordering it:
flixbus.com